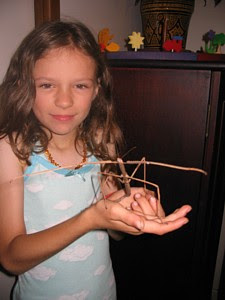 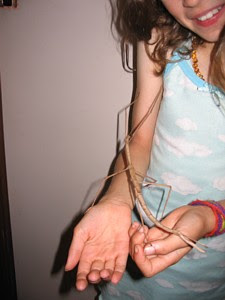 Meet Mr Stick who was our house guest for one night. My partner found it out near the front door on the fly screen on the front window. We kept it over night as the kids were asleep by then. We wanted to show them in the morning as a surprise.
Katie loves bugs. She named him Mr Stick. It would have to be one of the biggest stick insects I've seen in the wild.
Silly me I didn't think to measure it at the time but Katie is an 8 year old and compared to her, it's huge. Stick insects are quite placid creatures but I didn't like touching it (a big chicken I know LOL). I was scared that I might squish it accidentally. Big creatures without backbones make my skin crawl. I like to look at them but not touch them. Except cicadas......
I love cicadas come to think of it. It was a very quiet season this year. I only saw one Green Grocer this season - last season they were everywhere (I wasn't blogging then). I was hoping to have a cicada count on my blog this season....... well, maybe next season. 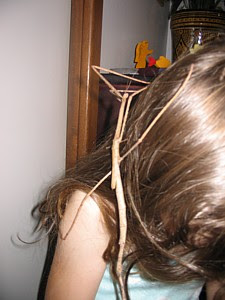 Katie was giggling when Mr Stick was climbing over her. She is so brave. LOL. 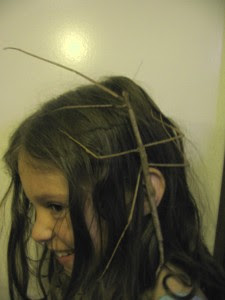 My mum and dad where coming over for a visit later that morning. They usually have their cameras with them. I put the stick insect on my Peace Lily thinking it would be a nice snack for it while we where waiting, then I would take a few pictures and let it go out in the backyard. 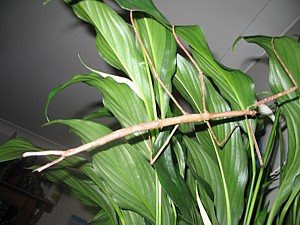 This stick insect only eats eucalyptus leaves so my Peace Lily wasn't a nice snack. 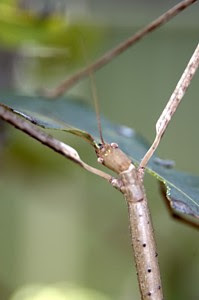 I had a go on my mum's Nikon camera. Wow, what a difference a decent camera makes.
I was trying to capture the movement of it jaws eating the gum leaf. I took a whole heap of photos - here are a couple. 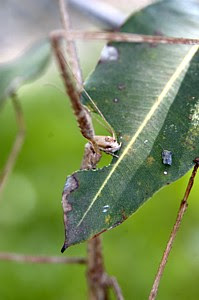 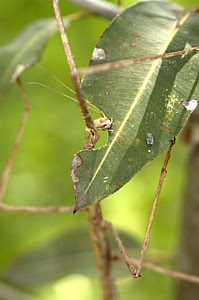 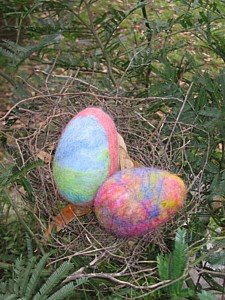 I wanted to write a post earlier this week but there has been a bit of bad weather in the mountains. There were black-outs two nights in a row and last week I thought the computer was going to pack it in - it was loading up so slowly and being silly buggers.
So, I've been doing a bit of craft. I got inspired by The Magic Onions with her felted eggs. Katie, her brother and I made some of our own. Katie's brother wanted to make a chocolate egg so he chose different shades of brown wool. He got a bit bored after a while with the rubbing of the wool to get it to felt up. It landed in the dirt a few times as well so it got a bit of a rough texture to it. It was a warm day so it was nice to wet felt outside. Little Loopity Lou loved playing with the water and Lux flakes mixture. After a while the soapy water thickened to a goo - it was a nice gooey mess for little finger to play in. 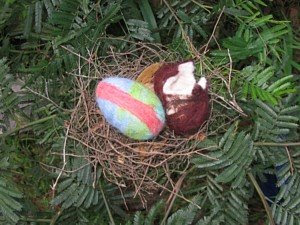 I also got the needle felting needles out and made an Autumn doll but I feel the purple wool that I used is a little dark for a nature table doll. I'll try to think of how to brighten her up a little. For some reason the wool that I dyed turned out patchy but I do like the variations of the purple in the wool. I also had a go at making a needle felted pumpkin. For my first attempt, I'm happy with how it turned out. I would like to make some more for the nature table as these are the only pumpkins I'll be harvesting this season. The pumpkin vine out the back isn't producing pumpkins - they flower and get to a certain size (say about a ping pong ball size), turn yellow and then fall off the vine. I was disappointed. I was hoping to have lots of home grown pumpkins for autumn/winter this year. 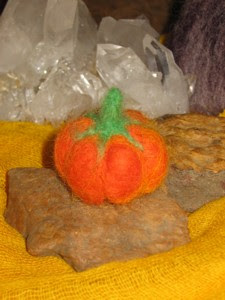 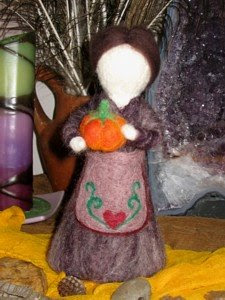 It's been a busy week - not much time for blogging. But I have been checking out everyone else's blogs - so much inspiration. Just not enough time in the day with 3 children to do all the crafting that I would love to do.
Earlier this week, Katie was finishing her breakfast and the colour pencils were on the table. She just started drawing her brother in the morning light. I took the photo to show what she saw. :) 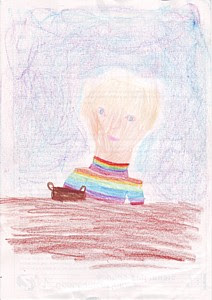 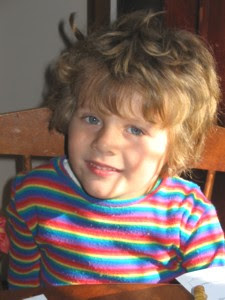 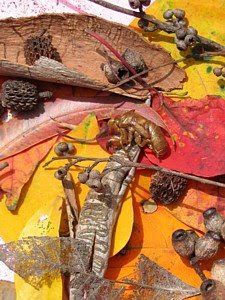 It's the first week of autumn ........
There are subtle little changes. I notice a slight chill in the mountain air in the morning and in the evening.
Today we took a trip down to Glenbrook lagoon to feed the ducks and go on a little bush walk. The children could see the beginning of the leaves changing colours. 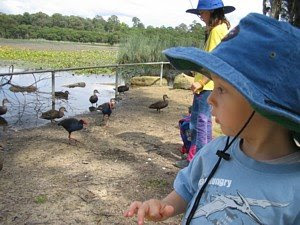 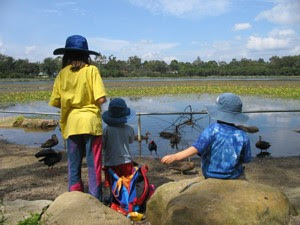 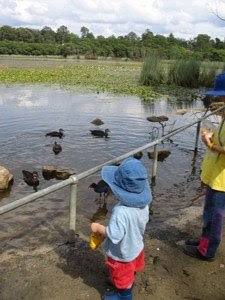 We met very friendly Swamp Hens with their beautiful blue chests and Chestnut Teal Ducks who where happy to have a nibble on some bread. We also saw tiny little fish swimming beneath their legs eating the crumbs that got dropped. 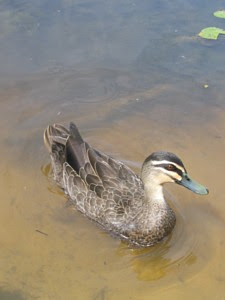 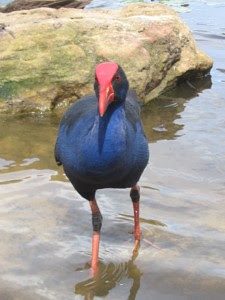 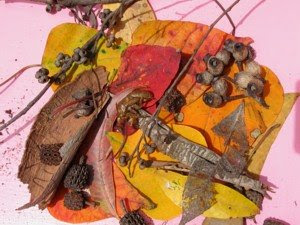 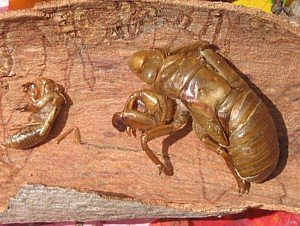 Katie and her brothers collected little treasures from nature that they found on the ground during our walk - a collection of feathers, seeds pods, leaves, scribbly gum bark and a few last remaining cicada shells of the season, oh... and a few rocks that Little Loopity Lou had picked up as well. 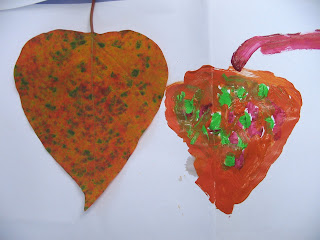 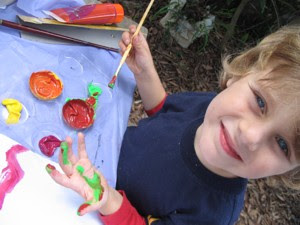 When we got home I got out the paints. We picked some Autumns colours - reds, oranges, yellows and greens. We talked about the colours we saw in the leaves and painted leaves and trees. They then mixed the colours of the paints to see what colour combinations (shades of brown LOL) they could come up with. 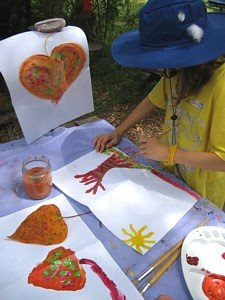 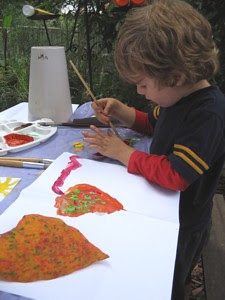